Are You Ready for Joan Rivers’ $150 Million Secret? 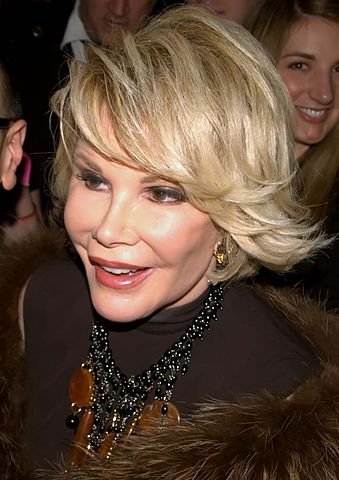 The unexpected death of Joan Rivers on September 4, 2014 was a shock to us all. Legendary comedienne, she spent her long life bringing laughter to millions of Americans with frequently irreverent roasting of her fellow celebrities (actress Elizabeth Taylor, in particular!). The 81-year-old was well known for her peculiarities, but the one that is alleged to have led to her death was her unique penchant for plastic surgery–a botched surgery stole her light from our lives.

Alive, Rivers reveled in exposure. Few were safe from her acerbic wit and the private lives of her peers never remained so for long with her in earshot. However, her attitude toward her death has now been shown markedly different. Unlike many unfortunate celebrities, her fortune–approximated to be over $150 million–purposefully avoided falling into the public eye. The reason? Joan thought ahead and kept much of the distribution of her wealth under wraps by use of a family trust.

She did, of course, leave a number of tantalizing tidbits behind that have got the gossip columns gabbing. Announced in late 2014, the barebones of the will were made publicly available. In it, Rivers named three co-executors to manage her estate: her daughter, Melissa Rivers, and two of her closest friends. Distributions of any remaining assets were left to the trustee of the Rosenberg Family Trust (established using Rivers’ married name) after all taxes and expenses had been made. Interestingly, she took a highly aggressive stance to prevent familial discord: anyone who made to contest the contents of her will would be entirely disinherited.

Other named beneficiaries of the trust include a number of charitable organizations, Rivers’ niece, nephew, grandson, and five employees. None of the amounts were specified.

Given her 81 years of experience in life, Rivers had no doubt seen enough of the trainwreck scandals that can follow a celebrity’s death and decided that her name would not be among them. Her apt estate planning left her most personal wishes out of the tabloids and protected her loved ones from too much unwanted media attention or contentious court battles. In using a private trust, she provided her daughter “the broadest and most absolute permissible direction” over the disposition of the trust estates.

You don’t need to be as rich and famous as Joan Rivers to make use of the tools proper estate planning offers. You want your loved ones to be protected and provided for, and a trust might be just the way to do it–some of the most notable benefits include:

The best way to learn about establishing a trust for your family is to talk with us about it in a family estate planning consultation, where we can identify the best strategies for you to provide for and protect the financial security of your loved ones. Whether you are looking for immediate assistance or are simply looking into the matter for the first time, give us a call at 612-206-3700 or reach out via our online contact form to schedule an appointment.

← Prev: Have an Independent Contractor? This Change Could Cost You Next: Make Sure Your Real Estate Doesn’t Do You Harm →

Contact us to see how we can help you with Trusts

Looking to Avoid Probate? Make Sure That You Fund Your Trust

You wouldn’t let your children get on their bicycles with only half a helmet; their protection is your number one goal. Yet many people make the mistake of leaving significant portions of their inheritable assets unshielded by the the trust they create. Even...

You Don’t Need to Be Rich: 6 Reasons Why a Trust Fund is for Anyone

Most of us, when we hear the words “trust fund”, we roll our eyes—but should we? Hollywood soap operas have for decades portrayed trust funds as a haven for only the children of the wealthiest families. You’ll be happy to know that the reality is far different from...

7 Reasons to Set Up a Trust for Your Family, Even If You Aren’t Wealthy

Do you think that trusts are only useful for wealthy people?  While it is true that many people with significant estates have trusts to protect and pass on their wealth, there are a number of reasons why trusts can also be useful for middle-class families. ...